Steven Soderbergh is not the first director to make movies with an iPhone. That honour goes to Sean Baker’s excellent Tangerine. But the controversial director has never been shy about embracing new technology and when the opportunity came to make his first movie with an iPhone, Soderbergh went for it.

His first Smartphone movie, shot with the iPhone 7 Plus, was the psychological thriller Unsane. He shot the film in just under two weeks with a fast filming schedule that set free both the crew and the actors. The film stars The Crown’s Claire Foy, who after moving to Boston is desperate to escape a stalker who has followed her for the last two years. She eventually finds herself in a psychiatric hospital where her grip on reality gets worse until she finds herself on the verge of a breakdown.

Soderbergh’s skilled voyeuristic camerawork perfectly matches the mobile freedom of the iPhone. He puts the Smartphone through various set-ups, which exploit its small size. He uses it everywhere. The iPhone is put on a bar, inside the boot of a car and he races it through corridors. All of which helps to create a sense of paranoia and tension.

After the success of Unsane, Soderbergh’s next film with a Smartphone would see an increase in budget and a rise in quality because of new technological improvements found in the iPhone 8 Plus. The Netflix financed High Flying Bird sees a renegade sports agent try to end an NBA media lockout by trying to destabilise the sport’s financial structure. Two popular player’s Twitter posts go viral after in impromptu basketball game at a charity event. A group kids attending, who film it with their Smartphones, are the only ones to see the game. The game is not under the control or televised by the NBA and thus undermines their dominance of the sport. 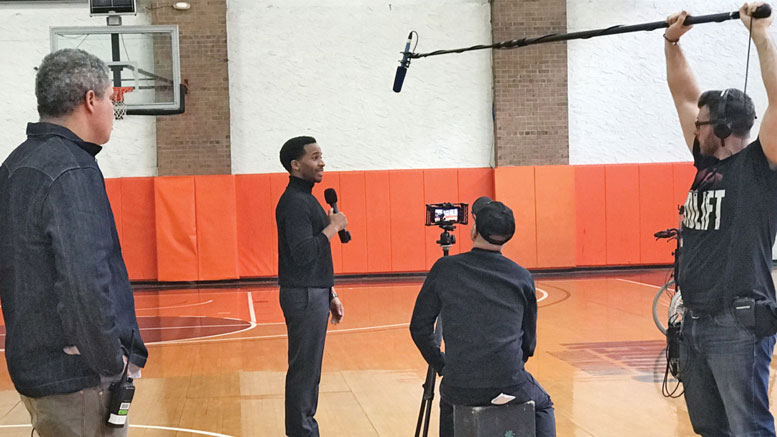 Soderbergh filmed High Flying Bird with The iPhone 8 Plus. Despite the freedom that Smartphone filmmaking offers, Soderbergh is also aware of the limits. They can be difficult to film in low light conditions, have a wide depth of field and are not good at shallow focus. This means nearly everything you film will be in focus. Although with the help of add on lenses you can help to relieve this problem. High Flying Bird was shot with the [amazon_textlink asin=’B07FK5DVBL’ text=’Moondog Labs 1.33x anamorphic adaptor’ template=’ProductLink’ store=’smartphonefil-20′ marketplace=’US’ link_id=’57dac3e2-b5e8-415a-ac28-0401297cb409′], which incidentally, Sean Baker also used to shoot Tangerine. This gives the result of a 2.35:1 final aspect ratio. The [amazon_textlink asin=’B07K4T1NG7′ text=’Moment 2x telephoto lens’ template=’ProductLink’ store=’smartphonefil-20′ marketplace=’US’ link_id=’70b78e5d-42c8-4f42-9407-a1f1ef6d526a’] is in use for close up work and ND filters also help to keep a 1/48th-sec shutter speed.

What shooting with the iPhone does give you is a faster production time and Soderbergh finished the rough cut of High Flying Bird just three hours after he wrapped principle photography. He always works economically and fast and working with the iPhone speeded up this further. Soderbergh used a single LED lighting panel to film High Flying Bird and that was only in use in one of every five scenes.

When Soderbergh starts his day he knows exactly what shots he wants to achieve and the speed and mobility of the iPhone helps him setup for filming quickly. He shoots with multiple Smartphones and just lets the actors perform whole scenes in their entirety. This means that his actors can give stronger performances and are not waiting around between setups. He can also put the Smartphone in places that would be hard to mount with bigger cameras. You can put an iPhone anywhere.

It is a lot cheaper to kit out a Smartphone for filmmaking than equiping a conventional camera setup. This helped to keep the budget low for High Flying Bird. Using apps like Filmic Pro greatly improve the image quality of the iPhone. You can use higher frame rates, higher bit rates, shoot in 4K, and have manual control over the image. You can even film with a new computational LogV2 encoding profile. This gives you a flat picture profile, which is ideal for grading. As Soderbergh has said, “You really don’t need much more than what’s in your pocket and some software, and off you go.”

What are the 15 best microphones for Smartphone filmmaking?